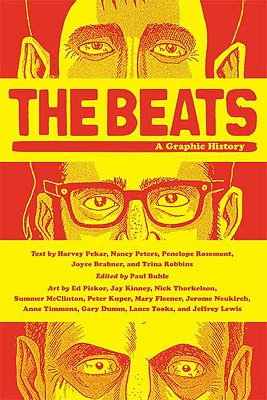 In "The Beats: A Graphic History," those who were mad to live have come back to life through artwork as vibrant as the Beat movement itself. Told by the comic legend Harvey Pekar, his frequent artistic collaborator Ed Piskor, and a range of artists and writers, including the feminist comic creator Trina Robbins and the "Mad" magazine artist Peter Kuper, "The Beats" takes us on a wild tour of a generation that, in the face of mainstream American conformity and conservatism, became known for its determined uprootedness, aggressive addictions, and startling creativity and experimentation. What began among a small circle of friends in New York and San Francisco during the late 1940s and early 1950s laid the groundwork for a literary explosion, and this striking anthology captures the storied era in all its incarnations--from the Benzedrine-fueled antics of Kerouac, Ginsberg, and Burroughs to the painting sessions of Jay DeFeo's disheveled studio, from the jazz hipsters to the beatnik chicks, from Chicago's College of Complexes to San Francisco's famed City Lights bookstore. Snapshots of lesser-known poets and writers sit alongside frank and compelling looks at the Beats' most recognizable faces. What emerges is a brilliant collage of--and tribute to--a generation, in a form and style that is as original as its subject.