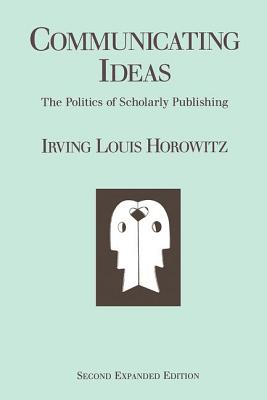 Communicating Ideas is the first attempt to place publishing in America in its political and commercial setting. The book addresses the political implications of scholarly communication in the era of the new computerized technology. Horowitz does so by examining classic problems of political theory in the context of property rights versus the presumed right to know, and the special strains involved in publishing as a business versus information as a public trust Offering a knowledgeable and insightful view of publishing in America and abroad, this book makes an important contribution to the study of mass culture in advanced societies.

The discussion ranges considerably beyond scholarly publications into communication as a whole, encompassing a wide range of issues from cable and satelite television control to specialized issues in copyright legislation, the prize system in publishing, and the definition of standards of the industry. This new edition, expanded by fully one third, expands on such themes, and in addition deals with Horowitz's new research on the history of social science publishing.

The first edition, published in 1986, was described by WE. Coleman as "a marvelous book which indeed offers a realistic analysis of publishing." John P. Dessauer declared that "no one thinking seriously about the future of scholarly communication can afford to ignore his work, in particular his treatment of basic issues." Joseph Gusfield "(Los Angeles Times), "in his review, noted that "Horowitz is alive to the possibilities and barriers for academics to reach a wider audience and for lay persons to utilize scholarship. Both groups can learn much from this intelligent book." And Philip G. Altbach "(Scholarly Publishing) "concluded his review by saying that "Communicating Ideas ""will be of interest not only to publishers and editors, but also to librarians and to sociologists of science."