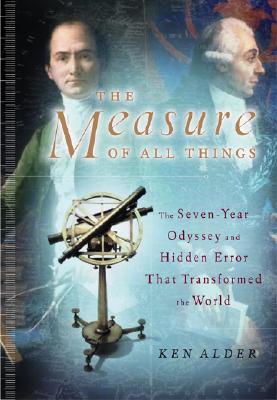 "The truth belongs to everyone, but error is ours alone."

"-- The Measure of All Things"

Amidst the chaos of the French Revolution, two intrepid astronomers set out in opposite directions from Paris to measure the world, one voyaging north to Dunkirk, the other south to Barcelona. Their findings would help define the meter as one ten-millionth of the distance between the pole and the equator, a standard that has since swept the planet. "The Measure of All Things" is the astonishing story of one of history's greatest scientific quests, a mission to measure the Earth and define the meter for all nations and for all time.

Yet when Ken Alder located the long-lost correspondence between the two men, along with their mission logbooks, he stumbled upon a two-hundred-year-old secret, and a drama worthy of the great French playwrights. The meter, it turns out, is in error. One of the two astronomers, Pierre-Franois-Andre Mechain, made contradictory measurements from Barcelona and, in a panic, covered up the discrepancy. The guilty knowledge of his misdeed drove him to the brink of madness, and ultimately to his death. Only then -- after the meter had already been publicly announced -- did his partner, Jean-Baptiste-Joseph Delambre, discover the truth and face a fateful choice: what matters more, the truth or the appearance of the truth?

To tell the story, Alder has not only worked in archives throughout Europe and America, but also bicycled the entire route traveled by Delambre and Mechain. Both a novelist and a prizewinning historian of science and the French Revolution, Alder summons all his skills to tell how the French Revolution mixed violent passion with the coldest sanity toproduce our modern world. It was a time when scientists believed they could redefine the foundations of space and time, creating a thirty-day month, a ten-day week, and a ten-hour day. History, they declared, was to begin anew. But in the end, it was science that was forever changed. The measurements brought back by Delambre and Mechain not only made science into a global enterprise and made possible our global economy, but also revolutionized our understanding of error. Where Mechain conceived of error as a personal failure, his successors learned to tame it.

This, then, is a story of two men, a secret, and a timeless human dilemma: is it permissible to perpetuate a small lie in the service of a larger truth? "Precision is a quest on which travelers, as Zeno foretold, journey halfway to their destination, and then halfway again and again and again, never reaching finality." In "The Measure of All Things" Ken Alder describes a quest that succeeded even as it failed. It is a story for all people, for all time.

Title: Measure of All Things: The Seven-Year Odyssey and Hidden Error That Transformed