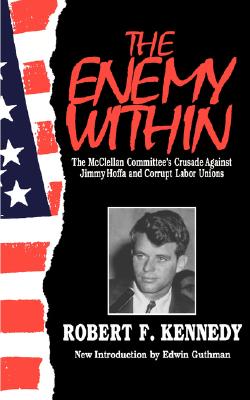 This is the authoritative, compelling account of one of the most famous, consummate, and effective Senate investigations in modern Congressional history. From 1956 to 1959 the Senate Select Committee on Improper Activities in the Labor or Management Field (chaired by Sen. McClellan and guided by chief counsel Robert Kennedy) heard more than 1500 witnesses and uncovered a shocking story, proving that labor leaders, management, the underworld, and public officials, sometimes in combination, sometimes separately, had worked to cheat and intimidate the rank-and-file union members. These revelations resulted in convictions, tough labor reform legislation, and a public awareness of organized crime's insidious and corrosive influence. Writing crisply, with indignation but also with humor, Kennedy focuses on how unions are bought, sold, and sometimes stolen; how 'democracy' actually operated in Jimmy Hoffa's captive unions and what happened to the men who dared to oppose him; how Hoffa was tried on charges of attempting to plant a spy in the McClellan Committee; how an investigating committee works; how the Committee resisted external pressures, threats, and ploys to derail its efforts; and more. "The Enemy Within "is illuminated by firsthand knowledge and charged with the fire of personal conviction. With a new introduction by the chairman of the Robert F. Kennedy Memorial, this book remains a vivid testament to Robert Kennedy's early commitment to equal justice for leaders and laborers alike.

Title: Enemy Within The Mcclellan Committee's Crisade Against Jimmy Hoffa and Corrupt L