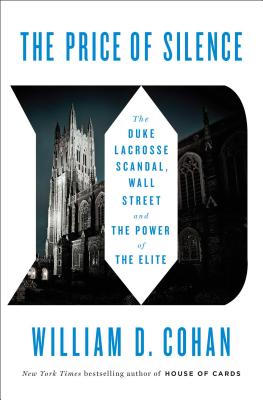 A Duke alumnus whose work has been hailed as "authoritative" ("The Washington Post"), "seductively engrossing" ("Chicago Tribune"), "riveting" ("The Economist"), and "masterful" ("Los Angeles Time"s), presents a stunning new account of the infamous Duke lacrosse team case.
Despite it being front-page nationwide news, the true story of the Duke lacrosse team rape case has never been told in its entirety. It is more complex and profound than all the reporting to date would indicate. "The Price of Silence "is the definitive account of what happens when the most combustive forces in American culture--unbridled ambition, intellectual elitism, athletic prowess, sexual and racial bias, and absolute prosecutorial authority--collide and then explode on a powerful university campus, in the justice system, and in the media.
Deeply reported and brilliantly written, "The Price of Silence" shines a bright light on the ever-widening gap between America's rich and poor, and how the powerful protect themselves, even at the price of justice.

Title: Price of Silence The duke lacrosse scandal the power of the elite and the corrup