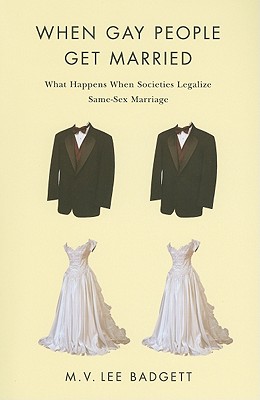 Winner of the 2010 Distinguished Book Award from the American Psychological Association's 44th Division (the Society for the Psychological Study of Lesbian, Gay, Bisexual and Transgender Issues)

The summer of 2008 was the summer of love and commitment for gays and lesbians in the United States. Thousands of same-sex couples stood in line for wedding licenses all over California in the first few days after same-sex marriage was legalized. On the other side of the country, Massachusetts, the very first state to give gay couples marriage rights, took the last step to full equality by allowing same-sex couples from other states to marry there as well. These happy times for same-sex couples were the hallmark of true equality for some, yet others questioned whether the very bedrock of society was crumbling. What would this new step portend?

In order to find out the impact of same-sex marriage, M. V. Lee Badgett traveled to a land where it has been legal for same-sex couples to marry since 2001: the Netherlands. Badgett interviews gay couples to find out how this step has affected their lives. We learn about the often surprising changes to their relationships, the reactions of their families, and work colleagues. Moreover, Badgett is interested in the ways that the institution itself has been altered for the larger society. How has the concept of marriage changed? When Gay People Get Married gives readers a primer on the current state of the same-sex marriage debate, and a new way of framing the issue that provides valuable new insights into the political, social, and personal stakes involved.

The experiences of other countries and these pioneering American states serve as a crystal ball as we grapple with this polarizing issue in the American context. The evidence shows both that marriage changes gay people more than gay people change marriage, and that it is the most liberal countries and states making the first move to recognize gay couples. In the end, Badgett compellingly shows that allowing gay couples to marry does not destroy the institution of marriage and that many gay couples do benefit, in expected as well as surprising ways, from the legal, social, and political rights that the institution offers.

Title: When Gay People Get Married: What Happens When Societies Legalize Same-Sex Marri