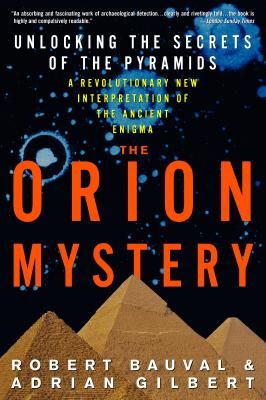 A revolutionary book that explains the most enigmatic and fascinating wonder of the ancient world: the Pyramids of Egypt.

In 1993, German robotics engineer Rudolf Gatenbrink discovered a sealed door within the Great Pyramid of Giza--a door left unopened for 4,500 years. With this discovery, Robert Bauval--who spent the decade prior to the discovery researching the pyramids--and Adrian Gilbert used astronomical data to reveal that more than just tombs, the pyramids were created to serve as a gateway to the stars; in the process, they uncovered what they believe to be the key to the plan that governed the construction of the great pyramids: the Orion Constellation. " An] absorbing and fascinating work of archaeological detection...clearly and rivetingly told...the book is highly and compulsively readable."--London Sunday Times.