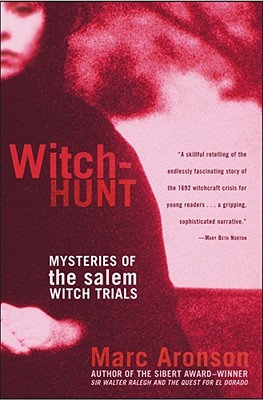 In a plain meetinghouse, a woman stands before her judges. The accusers, girls and young women, are fervent, overexcited, just on the edge of breaking out into convulsions. The accused is a poor, unpopular woman who had her first child before she was married. As the trial proceeds, the girls begin to wail, tear their clothing, and scream that the woman is hurting them. Some of them expose wounds to the horrified onlookers, holding out the pins that have stabbed them -- pins that have appeared as if by magic. Are the girls acting, or are they really tormented by an unseen evil? Whatever the cause, the nightmare in Salem has begun: The witch trials will eventually claim twenty-five lives, shatter the community, and forever shape the American social conscience.

Acclaimed historian Marc Aronson sifts through the facts, myths, half-truths, misinterpretations, and theories around the Salem witch trials to present us with a vivid narrative of one of the most compelling mysteries in American history. "Witch-Hunt" is a brilliant book that will stimulate and challenge readers to come to their own conclusions about what really happened during those terrifying months of accusations, trials, and executions.