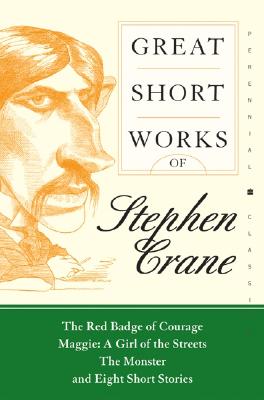 The collected short work of an American master, including The Red Badge of Courage and Maggie: A Girl of the Streets.

Stephen Crane died at the age of 28 in Germany. In his short life, he produced stories that are among the most enduring in the history of American ficiton. The Red Badge of Courage manages to capture both the realistic grit and the grand hallucinations of soldiers at war. Maggie: A Girl on the Streets reflects the range of Crane's ability to invest the most tragic and ordinary lives with great insight.

James Colvert writes in the introduction to this volume: "Here we find once again the major elements of Crane's art: the egotism of the hero, the indifference of nature, the irony of the narrator ... Crane is concerned with the moral responsibility of the individual ... (and) moral capability depends upon the ability to see through the illusions wrought by pride and conceit--the ability to see ourselves clearly and truly."

Great Short Works of Stephen Crane Includes: The Red Badge of Courage; Maggie: A Girl of the Streets; The Monster. Stories: An Experiment in Misery; A Mystery of Heroism; An Episode of War; The Upturned Face; The Open Boat; The Pace of Youth; The Bride Comes to Yellow Sky; The Blue Hotel.