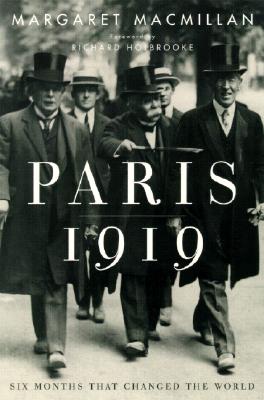 Winner of the Samuel Johnson Prize
Winner of the PEN Hessell Tiltman Prize
Winner of the Duff Cooper Prize
Between January and July 1919, after "the war to end all wars," men and women from around the world converged on Paris to shape the peace. Center stage, for the first time in history, was an American president, Woodrow Wilson, who with his Fourteen Points seemed to promise to so many people the fulfillment of their dreams. Stern, intransigent, impatient when it came to security concerns and wildly idealistic in his dream of a League of Nations that would resolve all future conflict peacefully, Wilson is only one of the larger-than-life characters who fill the pages of this extraordinary book. David Lloyd George, the gregarious and wily British prime minister, brought Winston Churchill and John Maynard Keynes. Lawrence of Arabia joined the Arab delegation. Ho Chi Minh, a kitchen assistant at the Ritz, submitted a petition for an independent Vietnam.
For six months, Paris was effectively the center of the world as the peacemakers carved up bankrupt empires and created new countries. This book brings to life the personalities, ideals, and prejudices of the men who shaped the settlement. They pushed Russia to the sidelines, alienated China, and dismissed the Arabs. They struggled with the problems of Kosovo, of the Kurds, and of a homeland for the Jews.
The peacemakers, so it has been said, failed dismally; above all they failed to prevent another war. Margaret MacMillan argues that they have unfairly been made the scapegoats for the mistakes of those who came later. She refutes received ideas about the path from Versailles to World War II and debunks the widelyaccepted notion that reparations imposed on the Germans were in large part responsible for the Second World War.
A landmark work of narrative history, "Paris 1919" is the first full-scale treatment of the Peace Conference in more than twenty-five years. It offers a scintillating view of those dramatic and fateful days when much of the modern world was sketched out, when countries were created--Iraq, Yugoslavia, Israel--whose troubles haunt us still.