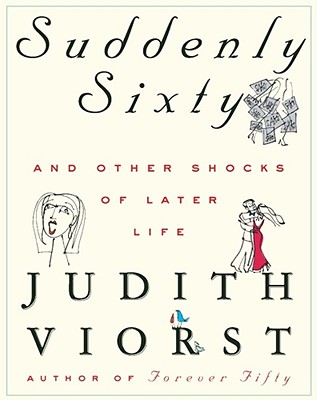 Judith Viorst is known and loved by readers of all ages, for children's books such as Alexander and the Terrible, Horrible, No Good, Very Bad Day; nonfiction titles, including the bestseller Necessary Losses; and her collections of humorous poetry, which make perfect gifts for birthdays, Mother's Day, graduation, Christmas, Chanukah, or at any time of year.

Suddenly Sixty is a funny and touching book that speaks directly to the sixty-ish woman, inviting her to laugh about, sigh over, and come to hopeful terms with the complex issues of this decade of life. Among the poems in this charmingly illustrated collection are those exploring the joys--and strains--of children and grandchildren, and the intimacy of old friends who've 'known each other so long/We knew each other back when we were virgins." There are poems that tip their hat to mortality, wrestle with a husband's retirement --"He's coming with me when I shop at the supermarket/So I won't have to shop alone. I like alone."-- and acknowledge the fact that at this stage of life we'd "give up a night of wild rapture with Denzel Washington for a nice report on my next bone density test." Offering plenty of laughs, a few tears, and cover-to-cover truths, these are poems for everyone who would "rather say never say die than enough is enough." Every woman who has reached this decade will--rueful and smiling--find herself in the pages of this book.

Title: Suddenly Sixty and Other Shocks of Later Life