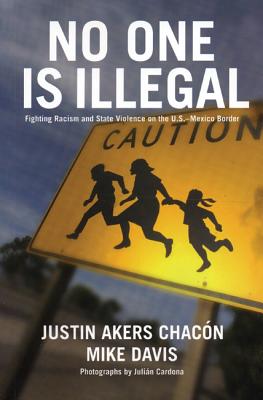 "A rare combination of an author, Mike Davis is] Rachel Carson and Upton Sinclair all in one."--Susan Faludi

" Davis' writing is] perceptive and rigorous."--David Montgomery, The Nation

No One Is Illegal debunks the leading ideas behind the often violent right-wing backlash against immigrants.

Countering the chorus of anti-immigrant voices, Mike Davis and Justin Akers Chac n expose the racism of anti-immigration vigilantes and put a human face on the immigrants who risk their lives to cross the border to work in the United States.

Davis and Akers Chac n challenge the racist politics of vigilante groups like the Minutemen, and argue for a pro-immigrant and pro-worker agenda that recognizes the urgent need for international solidarity and cross-border alliances in building a renewed labor movement.

Writer, historian, and activist Mike Davis is the author of many books, including City of Quartz, The Ecology of Fear, The Monster at Our Door, and Planet of Slums. Davis teaches in the Department of History at the University of California at Irvine, and lives in San Diego. Davis is the recipient of the 2001 Carey McWilliams Award and the World History Association Book Award.

Justin Akers Chac n is professor of U.S. History and Chicano Studies in San Diego, California. He has contributed to the International Socialist Review and the book Immigration: Opposing Viewpoints (Greenhaven Press).

Title: No One Is Illegal