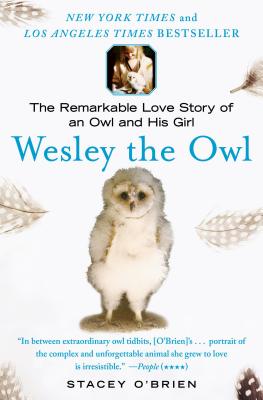 On Valentine's Day 1985, biologist Stacey O'Brien adopted Wesley, a baby barn owl with an injured wing who could not have survived in the wild. Over the next nineteen years, O'Brien studied Wesley's strange habits with both a tender heart and a scientist's eye--and provided a mice-only diet that required her to buy the rodents in bulk (28,000 over the owl's lifetime). She watched him turn from a helpless fluff ball into an avid com-municator with whom she developed a language all their own. Eventually he became a gorgeous, gold-and-white macho adult with a heart-shaped face who preened in the mir-ror and objected to visits by any other males to "his" house. O'Brien also brings us inside Caltech's prestigious research community, a kind of scientific Hogwarts where resident owls sometimes flew freely from office to office and eccentric, brilliant scientists were extraordinarily committed to studying and helping animals; all of them were changed by the animals they loved. As O'Brien gets close to Wesley, she makes astonishing discoveries about owl behavior, intelligence, and communication, coining the term "The Way of the Owl" to describe his noble behavior. When O'Brien develops her own life-threatening ill-ness, the biologist who saved the life of a helpless baby bird is herself rescued from death by the insistent love and courage of this wild animal.

Enhanced by wonderful photographs, Wesley the Owl is a thoroughly engaging, heart-warming, often funny story of a complex, emotional, non-human being capable of reason, play, and, most important, love and loyalty. Translated into eight languages and named an Audubon Magazine Editor's Choice, Wesley the Owl is sure to be cherished by animal lovers everywhere.

Title: Wesley the Owl: the Remarkable Story of an Owl and His Girl