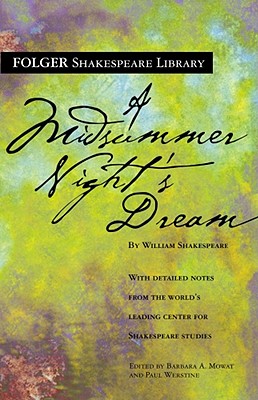 In A Midsummer Night's Dream, Shakespeare stages the workings of love. Theseus and Hippolyta, about to marry, are figures from mythology. In the woods outside Theseus's Athens, two young men and two young women sort themselves out into couples--but not before they form first one love triangle, and then another.

Also in the woods, the king and queen of fairyland, Oberon and Titania, battle over custody of an orphan boy; Oberon uses magic to make Titania fall in love with a weaver named Bottom, whose head is temporarily transformed into that of a donkey by a hobgoblin or "puck," Robin Goodfellow. Finally, Bottom and his companions ineptly stage the tragedy of "Pyramus and Thisbe." The authoritative edition of A Midsummer Night's Dream from The Folger Shakespeare Library, the trusted and widely used Shakespeare series for students and general readers, includes: -Freshly edited text based on the best early printed version of the play -Full explanatory notes conveniently placed on pages facing the text of the play -Scene-by-scene plot summaries -A key to the play's famous lines and phrases -An introduction to reading Shakespeare's language -An essay by a leading Shakespeare scholar providing a modern perspective on the play -Fresh images from the Folger Shakespeare Library's vast holdings of rare books -An annotated guide to further reading Essay by Catherine Belsey The Folger Shakespeare Library in Washington, DC, is home to the world's largest collection of Shakespeare's printed works, and a magnet for Shakespeare scholars from around the globe. In addition to exhibitions open to the public throughout the year, the Folger offers a full calendar of performances and programs. For more information, visit Folger.edu.