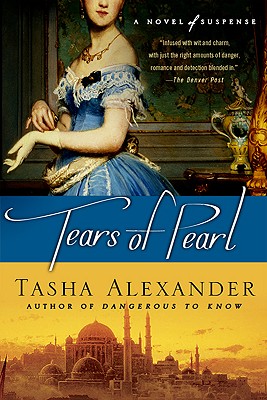 Set amid the beauty and decadence of the Ottoman Empire, Lady Emily's latest adventure is full of intrigue, treachery, and romance.

Looking forward to the joys of connubial bliss, newlyweds Lady Emily and Colin Hargreaves, diplomats of the British Empire, set out toward Turkey for an exotic honeymoon. But on their first night in the city, a harem girl is found murdered, strangled in the courtyard of the sultan's lavish Yildiz Palace. Sir Richard St. Clare, an Englishman who works at the embassy in Constantinople, is present and recognizes the girl as his own daughter who was kidnapped twenty years earlier. Emily and Colin promise the heartbroken father that they'll find her killer, but as the investigation gains speed, they find that appearance can be deceiving--especially within the confines of the seraglio.

As a woman, Emily is given access to the forbidden world of the harem and quickly discovers that its mysterious, sheltered walls offer no protection from a ruthless murderer. As the number of victims grows, Emily must rely on her own sharp wit in a heart-stopping finale if she is to stop a killer bent on exacting vengeance no matter how many innocent lives he leaves in his wake.