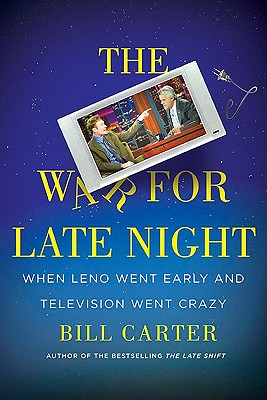 A dramatic account of the politics and personalities behind NBC's calamitous attempt to reinvent late-night television.
When NBC decided to move Jay Leno into prime time to make room for Conan O'Brien to host the "Tonight" show-a job he had been promised five years earlier-skeptics anticipated a train wreck for the ages. It took, in fact, only a few months for the dire predictions to come true. Leno's show, panned by critics, dragged down the ratings-and the profits-of NBC's affiliates, while ratings for Conan's new "Tonight" show plummeted to the lowest levels in history. Conan's collapse, meanwhile, opened an unexpected door of opportunity for rival David Letterman. What followed was a boisterous, angry, frequently hilarious public battle that had millions of astonished viewers glued to their sets. In "The War for Late Night, New York Times" reporter Bill Carter offers a detailed behind-the-scenes account of the events of the unforgettable 2009/2010 late-night season as all of its players- performers, producers, agents, and network executives-maneuvered to find footing amid the shifting tectonic plates of television culture.