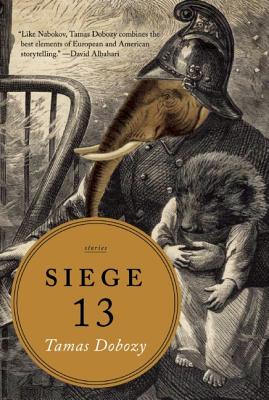 Built around the events of the Soviet Budapest Offensive at the end of World War II and its long shadow, the stories in Siege 13 are full of wit, irony, and dark humor. In a series of linked stories that alternate between the siege itself and a contemporary community of Hungarian migr s who find refuge in the West, Dobozy utilizes a touch of deadpan humor and a deep sense of humanity to extoll the horrors and absurdity of ordinary people caught in the crosshairs of brutal conflict and its silent aftermath.

Observing the uses and mis-uses of history, and their effect on individuals and community, Dobozy examines the often blurry line between right and wrong, portraying a world in which one man's betrayal is another man's survival, and in which common citizens are caught between the pincers of aggressors, leading to actions at once deplorable, perplexing, and heroic. Dobozy's stories feature characters, "lost forever in the labyrinth built on the thin border between memories and reality, past and present, words and silence. Like Nabokov, Tamas Dobozy combines the best elements of European and American storytelling, creating a fictional world of his own." (David Albahari, author of Gotz and Meyer)