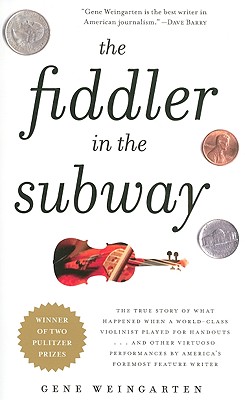 GENE WEINGARTEN IS THE O. HENRY OF AMERICAN JOURNALISM

Simply the best storyteller around, Weingarten describes the world as you think it is before revealing how it actually is--in narratives that are by turns hilarious, heartwarming, and provocative, but always memorable. Millions of people know the title piece about violinist Joshua Bell, which originally began as a stunt: What would happen if you put a world-class musician outside a Washington, D.C., subway station to play for spare change? Would anyone even notice? The answer was no. Weingarten's story went viral, becoming a widely referenced lesson about life lived too quickly. Other classic stories--the one about "The Great Zucchini," a wildly popular but personally flawed children's entertainer; the search for the official "Armpit of America"; a profile of the typical American nonvoter--all of them reveal as much about their readers as they do their subjects.

Title: The Fiddler on the Subway