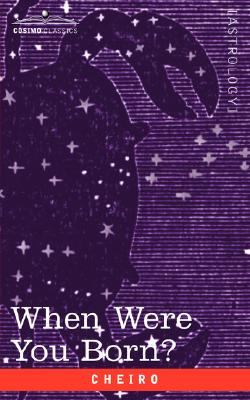 He was the Jeane Dixon of the early 20th century, psychic advisor to world-famous names in politics, entertainment, and royalty. But he lied about his own name, calling himself-when not answering to "Cheiro"-"Count Louis Hamon" though he was of rather more humble origin. So it's your call: Can trust him to accurately assess your character based solely on the month of your birth? In this book, first published in 1912, he "reveals" . which birth month is known for producing people who are "excellent in diplomacy," who "dazzle their listeners by their wit and brilliancy" . which month sees the arrival of those "inclined to become wrapped up in themselves and their own ideas" . when "very lonely" people are born . which month produces "good literary critics" . and more. Irish occultist Cheiro-aka WILLIAM JOHN WARNER (1866-1936)-wrote a number of books, including Palmistry for All and Cheiro's Guide to the Hand. Among his famous followers were Mark Twain and Oscar Wilde.

Title: When Were You Born?