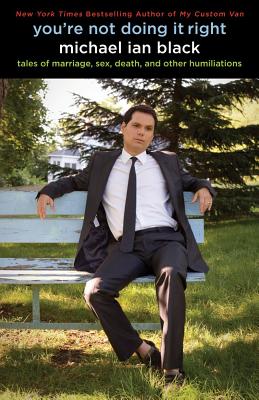 Following his first book of hilarious essays in My Custom Van, Michael Ian Black expands his commentary to the subject that has made him one of the most-followed celebrities on Twitter: his irreverent take on the joys of suburban family life.

"You're not doing it right." Michael Ian Black has been hearing these five words all his life. And now--on the eve of his fortieth birthday--he is finally beginning to wonder why. . . . As a husband and father living in the suburbs, Michael asks the question so many of us ask ourselves at one point or another: How did I end up here? (And also: If Fat Kevin Federline succumbs to his own wasted potential, what does that mean for the rest of us?) The answers to these questions, and others that you probably would have never thought to ask, are painstakingly detailed in You're Not Doing It Right, Michael Ian Black's debut memoir. Darkly humorous and told with raw honesty, Michael takes on his childhood, his marriage, his children, and his career with unexpected candor and deadpan wit in this funny-because-it's-true essay collection. He shares the neuroses that have plagued him since childhood and how they shaped him into the man he is today. Stories include: How his lesbian feminist mother raised him to be a tough but sensitive New Seventies Man like Alan Alda; how his camp girlfriend dumped him for a guy nicknamed Taco; how he backed into marrying his wife by breaking up with her first; how he is completely undone by hearing a Creed song on the radio on the eve of becoming a father; and how he learned to use Santa Claus as a "Bad Cop" threat to control his kids year round. From the comedian who brought you Stella and The State, Michael Ian Black says the kinds of things you're afraid to admit. Here he is: naked, exposed, a little chilly, and understandably shriveled.

Title: You're Not Doing it Right