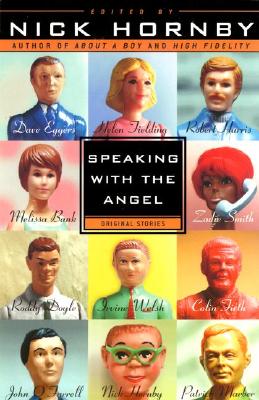 Compiled by bestselling author Nick Hornby and featuring brand new stories from the hottest writers on both sides of the Atlantic, Speaking with the Angel is a fresh and funny collection that is sure to be the literary anthology of the year.

Here is a book that was inspired by a very special boy and a very special school. Some money from each copy of Speaking with the Angel sold will benefit autism education charities around the world, including The Treehouse School in London, where Nick's son Danny is a student, and the New York Child Learning Institute here in the States. This project is truly a labor of love for Hornby and the other writers involved, many of whom are Nick's friends.

These original first-person narratives come from the most exciting voices in fiction. Melissa Bank gives readers a glimpse into the mind of a modern New Yorker whose still-new relationship is a constant source of surprise in "The Wonder Spot." In Zadie Smith's "I'm the Only One," a young man recalls his strained relationship with his diva-esque sister. Dave Egger's "After I Was Thrown in the River and Before I Drowned," is told from the viewpoint of an unfortunate pit bull. Helen Fielding offers up a new twist on I've fallen and I can't get up in "Luckybitch." And in Nick Hornby's "NippleJesus," a bruiser finds out that guarding modern art is far more hazardous than controlling the velvet ropes at a nightclub. Speaking with the Angel also includes stories from Roddy Doyle, Irvine Welsh, Colin Firth, John O'Farrell, Robert Harris, Patrick Marber, and Giles Smith.

Twelve completely new stories, written by twelve undeniably imaginative voices. Speaking with the Angel is at turns clever, outrageous, witty, edgy, tender, and wicked. This is what they meant by original.

Title: Speaking with the Angel