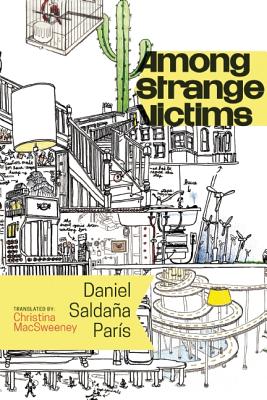 "Brief, brilliantly written, and kissed by a sense of the absurd....like a much lazier, Mexico City version of Dostoevsky's Underground Man."--John Powers, Fresh Air

"Daniel Salda a Par s knows how to talk about those other tragedies populating daily life: a boring, unwanted marriage; mind numbing office work; family secrets. He builds on those bricks of tedium a greatly enjoyable and splendidly well-written suburban farce." --Yuri Herrera

Rodrigo likes his vacant lot, its resident chicken, and being left alone. But when passivity finds him accidentally married to Cecilia, he trades Mexico City for the sun-bleached desolation of his hometown and domestic life with Cecilia for the debauched company of a poet, a philosopher, and Micaela, whose allure includes the promise of time travel. Earthy, playful, and sly, Among Strange Victims is a psychedelic ode to the pleasures of not measuring up.

Daniel Salda a Par s (born Mexico City, 1984) is an essayist, poet, and novelist whose work has been translated into English, French, and Swedish and anthologized, most recently in Mexico20: New Voices, Old Traditions, published in the United Kingdom by Pushkin Press. Among Strange Victims is his first novel to appear in the United States. He lives in Montreal, Quebec.