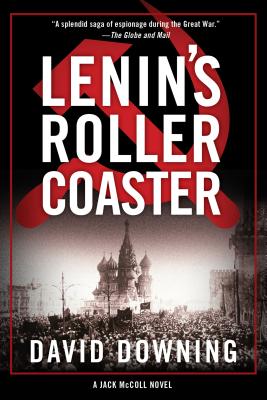 In Russia the Bolshevik revolution is in full-swing while the supposed Great War is destroying Europe in ways never before imagined. Fulltime lovers and part-time enemies, British spy Jack McColl and progressive American journalist Caitlin Hanley, have seen their relationship survive this far but in a world defined by "win at all cost" attitudes how much longer can they hold out?

Winter 1917: As a generation of Europe's young men perish on the Eastern and Western fronts, British spy Jack McColl is assigned a sabotage mission deep in Central Asia, where German influence is strong. The mission only becomes more dangerous the closer he gets to its heart. Meanwhile, the woman he loves, Irish-American radical journalist Caitlin Hanley, is in Bolshevik Russia, thrilled to have the chance to cover the Revolution. Caitlin knows Moscow is where she is meant to be during this historic event--even if she is putting her own life at risk to bear witness. But four years of bloody war have taken their toll on all of Europe, and Jack and Caitlin's relationship may become another casualty. Caitlin's political convictions have always been for progress, feminism, and socialism--often diametrically opposed to the conservative goals of the British Empire Jack serves. Up until now, Jack and Caitlin have managed to set aside their allegiances and stay faithful to each other, but the stakes of their affair have risen too high. Can a revolutionary love a spy? And if she does, will it cost one of them their life?