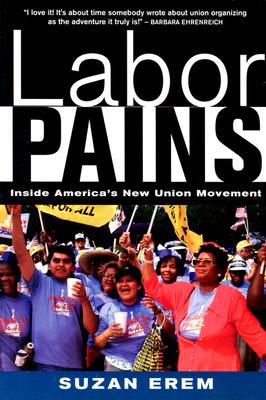 Labor Pains is an insider's account of the struggle to rebuild a vibrant and powerful trade union movement in the United States. It takes as its starting point the daily experience of a union organizer, and brings that experience to life. It enables us to grasp how the conflicting demands of race, class, and gender are lived in the new union movement.

The role of the unions is defined mainly by larger economic and political agendas. While keeping these agendas clearly in sight, Erem focuses primarily on aspects of the life of the union which often remain hidden. The personal crises of union members become entangled in the work of the union. The energies of the union are focused not only on winning gains from bosses but also on maintaining internal cohesion and morale among workers. Barriers of race, age and gender are constantly negotiated and overcome, and conflicts flare up across them at moments of tension. And union life goes on not only when the workers have made their point, or won a victory, but after defeat as well. The personalities and ambitions of union organizers converge at times and become a source of tension at others. Each individual within the larger collective has their own task of finding a viable balance between public and private selves.

These intersecting lines of force are imaginatively recreated in this book. Erem writes as a woman in a union movement which is dominated by men; as the child of immigrants in a movement whose members are increasingly immigrants themselves; as one who finds herself in the racial no man's land between black and white. While never underestimating the obstacles in the way of the union movement, she makes a powerful and passionate case for organizing the disorganized and empowering the powerless.