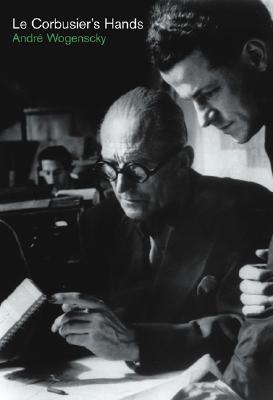 Le Corbusier's assistant and fellow architect remembers his mentor in a series of concise and poetic reflections.

Le Corbusier's Hands offers a poetic and personal portrait of Le Corbusier--a nuanced portrayal that is in contrast to the popular image of Le Corbusier the aloof modernist. The author knew Le Corbusier intimately for thirty years, first as his draftsman and main assistant, later as his colleague and personal friend. In this book, written in the mid-1980s, Wogenscky remembers his mentor in a series of revealing personal statements and evocative reflections unlike anything that exists in the vast literature on Le Corbusier. Wogenscky draws a portrait in swift, deft strokes--50 short chapters, one leading to the next, one memory of Le Corbusier opening into another. Appearing and reappearing like a leitmotif are Le Corbusier's hands--touching, taking, drawing, offering, closing, opening, grasping, releasing: "It was his hands that revealed him.... They spoke all his feelings, all the vibrations of his inner life that his face tried to conceal." Wogenscky writes about Le Corbusier's work, including the famous design of the chapel at Ronchamp, his ideas for high-density Unit s d'Habitation linked to the center of a "Radiant City," and his "Modulor" system for defining proportions--which Wogenscky compares to a piano tuner's finding the exact relation between sounds. He remembers the day Picasso spent with Le Corbusier at the Marseilles building site--"All day long they outdid one another in a show of modesty," he observes in amazement. He adds, speaking for himself and the others present, "We were inside a double energy field." And Wogenscky writes about Le Corbusier more personally. "I have spent years trying to understand what went on in his mind and in his hand," he tells us. With Le Corbusier's Hands, Wogenscky gives us a unique record of an enigmatic genius.