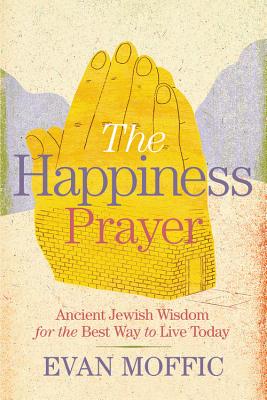 At age 30 Evan Moffic became the leader of a large congregation. He had great success. But he couldn't find happiness. Then he found a 2000-year-old prayer. In it were hidden elements of Jewish wisdom. They became a part of his life and those of his congregation and transformed them and him.

What if we had a clear path to follow when life disappointed us? What if we had a time-tested guide for a life of deeper meaning and happiness? That is what Rabbi Moffic discovered in an ancient Jewish prayer.
Based on ten practices any person can follow, the prayer has helped thousands of people-couples, teenagers, empty nesters struggling with loss, divorce, and ruptured relationships-find renewed meaning and purpose in their lives.
Moffic discovered the power of the prayer when he was called to become the youngest rabbi to lead a large US synagogue at just thirty years of age. The prayer became his guidepost, providing him with the wisdom to lead beyond his years. By incorporating the power of this prayer into his life and using it to guide his congregation and community, he became known as "the smiling rabbi."
In the tradition of Rabbi Harold Kushner, Rabbi Evan Moffic opens up the Jewish wisdom tradition with insights for today. Drawing from interactions with thousands of congregants, as well as his own experience; relating stories of real people; providing accessible commentary from contemporary psychologists; and sprinkling in warm humor, this rabbi of a new generation reveals the means and meaning of joyous living that will appeal to everyone. p.p1 {margin: 0.0px 0.0px 0.0px 0.0px; font: 13.0px Times; -webkit-text-stroke: #000000} p.p2 {margin: 0.0px 0.0px 0.0px 28.8px; text-indent: -24.0px; font: 13.0px Times; -webkit-text-stroke: #000000} span.s1 {font-kerning: none} span.s2 {font: 13.0px 'Lucida Grande'; font-kerning: none} span.s3 {font: 9.0px 'Times New Roman'; font-kerning: none}