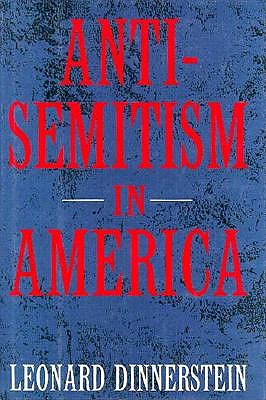 Is antisemitism on the rise in America? Did the "hymietown" comment by Jesse Jackson and the Crown Heights riot signal a resurgence of antisemitism among blacks? The surprising answer to both questions, according to Leonard Dinnerstein, is no--Jews have never been more at home in America. But what we are seeing today, he writes, are the well-publicized results of a long tradition of prejudice, suspicion, and hatred against Jews--the direct product of the Christian teachings underlying so much of America's national heritage.
In Antisemitism in America, Dinnerstein provides a landmark work--the first comprehensive history of prejudice against Jews in the United States, ranging from its foundations in European culture to the present day. Dinnerstein's deeply documented book reveals how non-Christians were excluded from voting, for example, in Rhode Island until 1842, North Carolina until 1868, and in New Hampshire until 1877. The Civil War, Dinnerstein writes, brought a new wave of antisemitism as both sides assumed that Jews supported with the enemy. The decades that followed marked the emergence of a full-fledged antisemitic society, as Christian Americans excluded Jews from their social circles. Antisemitic fervor climbed higher after the turn of the century, accelerated by eugenicists, fear of Bolshevism, the publications of Henry Ford, and the Depression. Just before our entry into World War II, the author tells us, it reached a climax, as Father Coughlin attacked Jews over the airwaves (with the support of much of the Catholic clergy) and Charles Lindbergh delivered an openly antisemitic speech to an isolationist meeting. Dinnerstein devotes individual chapters to antisemitism in the South and among African Americans, showing that prejudice among both whites and blacks flowed from the same stream of Southern evangelical Christianity. After the war, with fresh economic opportunities and increased activities by civil rights advocates, antisemitism went into a sharp decline--though it frequently appeared in shockingly high places, including statements by Nixon and his Chairman of the Joint Chiefs of Staff.
"It must also be emphasized," Dinnerstein writes, "that in no Christian country has antisemitism been weaker than it has been in the United States," with its traditions of tolerance, diversity, and a secular national government. This book, however, reveals in disturbing detail the resilience, and vehemence, of this ugly prejudice. Penetrating, authoritative, and frequently alarming, this is the definitive account of a plague that refuses to go away.