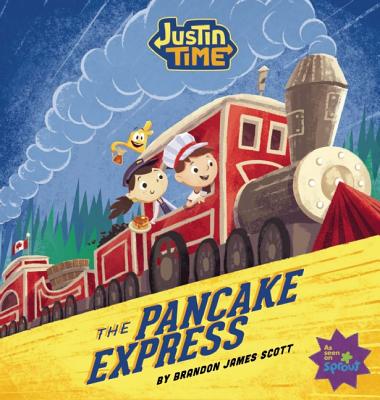 "Remember as a kid when possibilities seemed endless and a cardboard box could transform into a fort, a tank, a mountain, or a Super Mario pipe?... Justin Time is a new animated program for pre-schoolers that brings that boundless creativity to the small screen. The show centers on Justin, a young boy who imagines himself traveling around the world at different points in history." -- Torontoist

"Tired of preschool cartoons spending an inordinate amount of time on boring matching games, talking down its audience, or afraid of going out on a creative limb? If so, then meet Justin Time.... The series is about trust and teamwork--whether nestled deep in the jungle or perched high on top of a snowcapped mountain--and the many other elements of friendship most conducive to having a great time (and learning a thing or two along the way). Justin Time encourages a kind of freewheeling imagination that hopes to leave the didactic and lazy storytelling of yester-animation in the dust." -- Animation Insider All aboard Justin and his pal Squidgy imagine themselves behind the wheel of a classic steam train, delivering important cargo for their friend Olive. But they discover it's not easy getting through the Canadian wilderness. Will their barrel of maple syrup make it to Flap Jack Falls in time for the Pancake Festival? Never give up This new series is based on episodes from a popular animated television show, which airs in the United States on weekdays on PBS Sprout and Saturdays on NBC Kids, and debuts in Canada on the Family Channel beginning in September 2012. "Justin Time is a wonderful series that gives preschoolers a sense of history and all the great things in the world around them - these delightful stories are sure to charm young readers." --Andrew Beecham, Senior Vice President, Programming for PBS KIDS Sprout "With easy-to-digest lessons about animals and ecosystems, Justin Time holds preschoolers' interest while imparting knowledge." - Common Sense Media