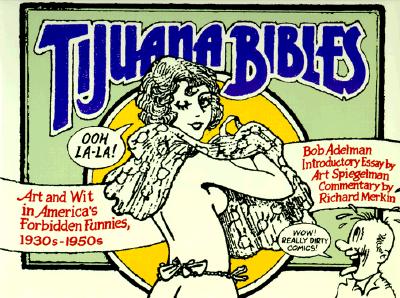 Hidden in a corner among the great sacred texts of the world lies a series of exuberantly ribald underground comics known as the Tijuana Bibles. Iconoclastic, hilarious, and sexy, these anonymous little books, written from the 1930s through the 1950s, are revered among scholars and aficionados of American folk art, and devotees of comics as well as collectors of erotica. The primitive energy of their vigorous, often crude line, combined with their gonzo sensibilities, has given the Bibles a tremendous if largely unacknowledged influence on such talents as Art Spiegelman, Robert Crumb, and Lenny Bruce.

Comic strips in general were an American phenomenon, and at their zenith the Sunday funnies were as important as breakfast. But the anonymous creators of the Tijuana Bibles turned the saccharine tradition of the comics on its head, cheerfully savaging every sacred cow in the pasture in their pursuit of satire and sex. Political leaders, cartoon heroes, storybook legends, and American folk icons -- no one was safe from the glowering wit and smutty irreverence of these eight- and sixteen-page booklets, cranked out illicitly in basements and sold under counters across the country. From Donald Duck, Al Capone, and Greta Garbo to Lou Gehrig, Mahatama Gandhi, and the Fuller Brush Man, the pure and the impure were burlesqued with equal inspiration.

Aboveground for the first time, these subverive comic masterworks are presented here in all their brilliant and raunchy glory. Author Bob Adelman reviewed almost 1,000 of the Tijuana Bibles before selecting 100 of the most lively and important examples of the genre. The book opens with an introductory essay by Art Spiegelman, America's mostfamous comic artist and a man who proudly acknowledges the impact these rollicking and scandalous little booklets have had on his own work.