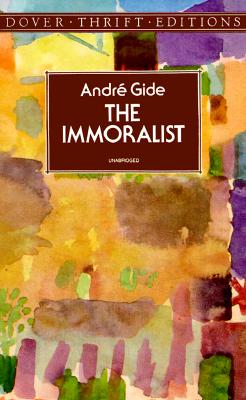 Among the masters of modern French literature, Andre Gide (1869-1951) concerned himself with the motivation and function of the will, with self-cultivation, and the conduct of the individual in the modern world. His perception, integrity, and purity of style brought him much acclaim, including the Nobel Prize for Literature in 1947.
The Immoralist (written in 1901, published in 1902), one of his best-known works, deals with the unhappy consequences of amoral hedonism. Filled with similarities of Gide's own life, it is the story of Michel, who, during three years of travel in Europe and North Africa, tries to rise above good and evil and allow his passions (including his attraction to young Arab boys) free rein; in doing so, he neglects his wife, Marceline, who eventually dies of tuberculosis. The book is in the form of Michel's attempt to justify his conduct to his friends.
Notable for its fusion of autobiographical elements with both biblical and classical clarity and lack of clutter, The Immoralist marks a decided shift in Gide's prose style and a somewhat decadent floweriness to his later classical clarity and lack of clutter. This nobility and simplicity of style is skillfully retained in this excellent new translation by Stanley Appelbaum, which also preserves the passion and intensity of the original.