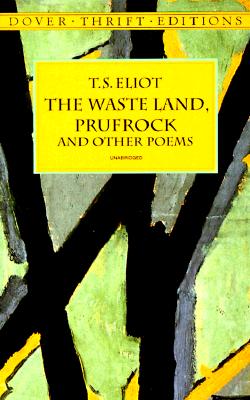 In the masterly cadences of T. S. Eliot's verse, the 20th century found its definitive poetic voice, an incredible "image of its accelerated grimace," in the words of Eliot's friend and mentor, Erza Pound. This volume is a rich collection of much of Eliot's greatest work.
The title poem, The Waste Land (1922), ranks among the most influential poetic works of the century. An exploration of the psychic stages of a despairing soul caught in a struggle for redemption, the poem contrasts the spiritual stagnation of the modern world with the ennobling myths of the past. Other selections include the complete contents of Prufrock (1971), including "The Love Song of J. Alfred Prufrock," "Portrait of a Lady," "Rhapsody on a Windy Night," "Mr. Apollinax," and "Morning at the Window." From Poems (1920) there are "Gerontion," "The Hippopotamus," "Mr. Eliot's Sunday Morning Service," "Sweeney Among the Nightingales," and more.
An indispensable resource for all poetry lovers, this modestly priced edition is also an ideal text for English literature courses from high school to college. Includes "The Love Song of J. Alfred Prufrock" from the Common Core.