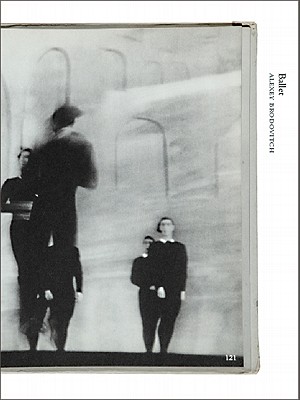 Published in 1945, Alexey Brodovitch's Ballet is easily among the most legendary photobooks of the twentieth century: the first and only book he authored as photographer, it was printed in a small run of a few hundred copies, and quickly became a rarity. A Russian migr in 1920s Paris, Brodovitch began his career as a scene painter for Diaghilev's Ballet Russes, and had firmly established himself as a leading art director and graphic designer in New York when he began photographing the Ballets Russes de Monte Carlo in the mid-1930s. Shot on 35 mm film, Brodovitch's images radically disregard conventions of "good" technique; blurred and fast-paced, they capture the motion and spirit of dance both in rehearsals and on stage. Errata Editions reproduces every captivating page spread from this rarely seen classic of both dance and photography history, making it at last available to a broader audience.
The Errata Editions' Books on Books series is an ongoing publishing project dedicated to making rare and out-of-print photography books accessible to students and photobook enthusiasts. These are not reprints or facsimiles but complete studies of the original books. Each volume in the series presents the entire content, page for page, of an original master bookwork which, up until now, has been too rare or expensive for most to experience. Through a mix of classic and contemporary titles, this series spans the breadth of photographic practice as it has appeared on the printed page and allows further study of the creation and meanings of these great works of art. Each volume in the series contains illustrations of every page in the original photobook, a new essay by an established writer on photography, production notes about the creation of the original edition and biographical and bibliographical information about each artist.