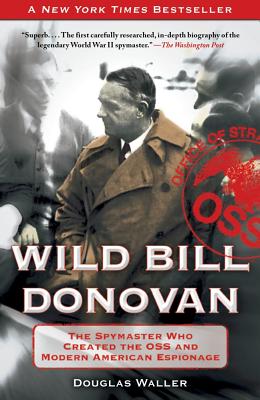 Now in paperback: "Entertaining history...Donovan was a combination of bold innovator and imprudent rule bender, which made him not only a remarkable wartime leader but also an extraordinary figure in American history" (The New York Times Book Review).

He was one of America's most exciting and secretive generals--the man Franklin Roosevelt made his top spy in World War II. A mythic figure whose legacy is still intensely debated, "Wild Bill" Donovan was director of the Office of Strategic Services (the country's first national intelligence agency) and the father of today's CIA. Donovan introduced the nation to the dark arts of covert warfare on a scale it had never seen before. Now, veteran journalist Douglas Waller has mined government and private archives throughout the United States and England, drawn on thousands of pages of recently declassified documents, and interviewed scores of Donovan's relatives, friends, and associates to produce a riveting biography of one of the most powerful men in modern espionage. William Joseph Donovan's life was packed with personal drama. The son of poor Irish Catholic parents, he married into Protestant wealth and fought heroically in World War I, where he earned the nickname "Wild Bill" for his intense leadership and the Medal of Honor for his heroism. After the war he made millions as a Republican lawyer on Wall Street until FDR, a Democrat, tapped him to be his strategic intelligence chief. A charismatic leader, Donovan was revered by his secret agents. Yet at times he was reckless--risking his life unnecessarily in war zones, engaging in extramarital affairs that became fodder for his political enemies--and he endured heartbreaking tragedy when family members died at young ages. Wild Bill Donovan reads like an action-packed spy thriller, with stories of daring young men and women in his OSS sneaking behind enemy lines for sabotage, breaking into Washington embassies to steal secrets, plotting to topple Adolf Hitler, and suffering brutal torture or death when they were captured by the Gestapo. It is also a tale of political intrigue, of infighting at the highest levels of government, of powerful men pitted against one another. Donovan fought enemies at home as often as the Axis abroad. Generals in the Pentagon plotted against him. J. Edgar Hoover had FBI agents dig up dirt on him. Donovan stole secrets from the Soviets before the dawn of the Cold War and had intense battles with Winston Churchill and British spy chiefs over foreign turf. Separating fact from fiction, Waller investigates the successes and the occasional spectacular failures of Donovan's intelligence career. It makes for a gripping and revealing portrait of this most controversial spymaster.