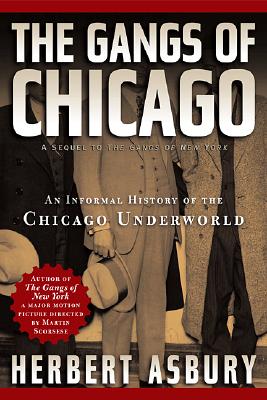 This classic history of crime tells how Chicago's underworld earnedand keptits reputation. Recounting the lives of such notorious denizens as the original Mickey Finn, the mass murderer H. H. Holmes, and the three Car Barn Bandits, Asbury reveals life as it was lived in the criminal districts of the Levee, Hell's Half-Acre, the Bad Lands, Little Cheyenne, Custom House Place, and the Black Hole. His description of Chicago's infamous red light districtwhere the brothels boasted opulence unheard of before or sincevividly captures the wicked splendor that was Chicago. The Gangs of Chicago spans from the time "Slab Town" was settled to Prohibition days. The story of Chicago's golden age of crime climaxes with a dramatic account of the careers of the "biggest of the Big Shots": Big Jim Colosimo, Terrible Johnny Torrio, and the elusive Al Capone. Photographs and illustrations round out this telling of Chicago's early underworld. "Still the most detailed, reliable, and readable account of the nether side of Chicago's first century, deserves reading and rereading...."Perry R. Duis, Chicago historian"