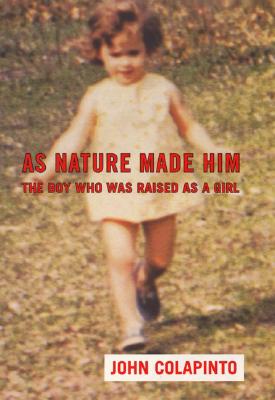 In 1967, after a baby boy suffered a botched circumcision, his family agreed to a radical treatment. On the advice of a renowned expert in gender identity and sexual reassignment at Johns Hopkins Hospital, the boy was surgically altered to live as a girl. This landmark case, initially reported to be a complete success, seemed all the more remarkable since the child had been born an identical twin: his uninjured brother, raised as a boy, provided to the experiment the perfect matched control.

The so-called twins case would become one of the most famous in modern medicine and the social sciences; cited repeatedly over the past thirty years as living proof that our sense of being male or female is not inborn but primarily the result of how we are raised. A touchstone for the feminist movement, the case also set the precedent for sex reassignment as standard treatment for thousands of newborns with similarly injured, or irregular, genitals.

But the case was a failure from the outset. From the start the famous twin had, in fact, struggled against his imposed girlhood. Since age fourteen, when finally informed of his medical history, he made the decision to live as a male. John Colapinto tells this extraordinary story for the first time in As Nature Made Him. Writing with uncommon intelligence, insight, and compassion, he also sets the historical and medical context for the case, exposing the thirty-year-long scientific feud between Dr. John Money and his fellow sex researcher, Dr. Milton Diamond--a rivalry over the nature/nurture debate whose very bitterness finally brought the truth to light. A macabre tale of medical arrogance, As Nature Made Him is first and foremost a human drama of one man's-and one family's--amazing survival in the face of terrible odds. The human intimacy of the story is all the greater for the subject's courageous decision to step out from behind the pseudonym that has shrouded his identity for the past thirty years.

Title: As Nature Made Him: The Boy Who Was Raised As A Girl