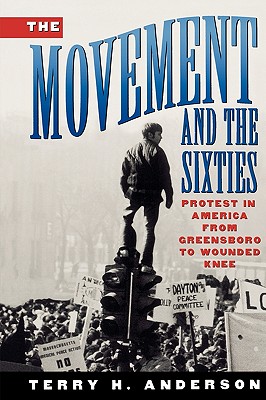 It began in 1960 with the Greensboro sit-ins. By 1973, when a few Native Americans rebelled at Wounded Knee and the U.S. Army came home from Vietnam, it was over. In between came Freedom Rides, Port Huron, the Mississippi Summer, Berkeley, Selma, Vietnam, the Summer of Love, Black Power, the Chicago Convention, hippies, Brown Power, and Women's Liberation--The Movement--in an era that became known as The Sixties. Why did millions of Americans become activists; why did they take to the streets?
These are questions Terry Anderson explores in The Movement and The Sixties, a searching history of the social activism that defined a generation of young Americans and that called into question the very nature of "America." Drawing on interviews, "underground" manuscripts collected at campuses and archives throughout the nation, and many popular accounts, Anderson begins with Greensboro and reveals how one event built upon another and exploded into the kaleidoscope of activism by the early 1970s. Civil rights, student power, and the crusade against the Vietnam War composed the first wave of the movement, and during and after the rip tides of 1968, the movement changed and expanded, flowing into new currents of counterculture, minority empowerment, and women's liberation. The parades of protesters, along with schocking events--from the Kennedy assassination to My Lai--encouraged other citizens to question their nation. Was America racist, imperialist, sexist?
Unlike other books on this tumultuous decade, The Movement and The Sixties is neither a personal memoir, nor a treatise on New Left ideology, nor a chronicle of the so-called leaders of the movement. Instead, it is a national history, a compelling and fascinating account of a defining era that remains a significant part of our lives today.

Title: Movement and the Sixties