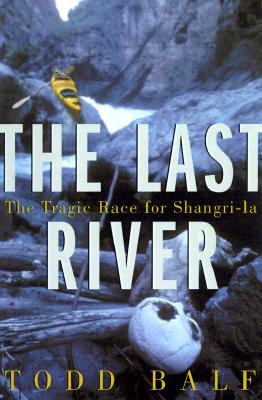 It was the ultimate whitewater adventure on the Mount Everest of rivers, and the biggest challenge of their lives....
October 1998 an American whitewater paddling team traveled deep into the Tsangpo Gorge in Tibet to run the Yarlung Tsangpo, known in paddling circles as the "Everest of rivers." On Day 12 of that trip, the team's ace paddler, one of four kayakers on the river, launched off an eight-foot waterfall and flipped. He and his overturned kayak spilled into the heart of the thunderous "freight training" river and were swept downstream, never to be seen again.
The Last River: The Tragic Race for Shangri-la is a breathtaking account of this ill-fated expedition, a fascinating exploration of what propelled these kayakers to take on the seething big water and perilous Himalayan terrain of the deepest gorge on the planet. This was the magical Shangri-la of legend, a 140-mile-long canyon framed by 25,000-foot snowcapped peaks, a place of unimaginable beauty called Pemako in ancient Buddhist texts that was rumored to contain mammoth waterfalls.
At the close of the twentieth century, an end-to-end descent of the gorge filled the imaginations of some of the best boaters in the world, who saw in the foam and fury of the Tsangpo's rapids the ultimate whitewater challenge. For Wick Walker and Tom McEwan, extreme whitewater pioneers, best friends, and trip leaders, the Tsangpo adventure with Doug Gordon, Olympic medal-winning paddler Jamie McEwan (Tom's brother), and Roger Zbel was the culmination of a twenty-five-year quest. Fueled by narratives of early explorers, Walker and McEwan kept their dream alive and waited until the Chinese government opened the gorge to Westerners.With financial backing from the National Geographic Society, the group was finally good to go in 1998.
Swollen to three times the size they had expected because of record rains and heavy snowmelt, the Tsangpo lived up to its fearsome reputation. On numerous occasions the team questioned whether to continue, but chose to press forward. The Last River probes beyond the extreme sports cliches and looks at the complex personal and intellectual reasons for the seemingly irresistible draw of Tibet's Great River. For Walker, Gordon, Zbel, and the McEwans -- husbands, fathers, friends, and brothers -- the Tsangpo wasn't a run toward death but a celebration of life, adventure, and the thing that tied them to one another -- awe-inspiring rivers. The Last River is also a riveting journey to one of the world's wildest and most alluring places, a thrilling book that invites us into the Himalayas of Jon Krakauer's classic, Into Thin Air, but from a totally new perspective -- on a historic river so remote that only the most hardy and romantic souls attempt to unlock its mysteries.
Visit www.randomhouse.com/features/lastriver

Title: The Last River: The Tragic Race for Shangri-La