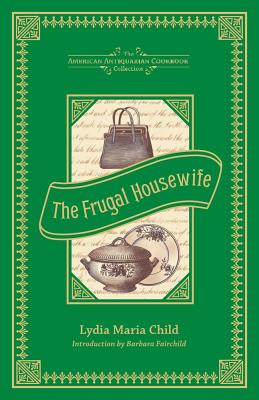 Published in Boston in 1829, this volume in the American Antiquarian Cookbook Collection by a well-known social reformer, prolific novelist, and journalist provided recipes and tips for homemakers of the early 19th century with an emphasis on self-reliance and frugality in the household. The first American cookbook to focus on economy in the kitchen and the home.
Published in 1829 in Boston, "The Frugal Housewife" was written by one of the foremost female writers and social reformers of her time, Lydia Maria Child. The charming collection of recipes and tips for homemakers of the early 19th century emphasized frugality in the kitchen and self-reliance in the household--making this work wildly popular in its day. It had over 35 printings, and much of the content is relevant in modern times. "Frugal Housewife" was the first American cookbook to replace Amelia Simmons's "American Cookery," still in use since publication in 1796, and it was also the first to emphasize the themes of thrift and economy in the kitchen.

Considered a "must-read" for every new bride in the 19th century, "The Frugal Housewife" offered simple recipes such as Apple Pie, Corned Beef, Gingerbread, Indian Cakes, and Pie Crust, but also included advice on parenting, cleaning, and medical problems, plus numerous practical, Yankee-straightforward tips for saving money. Not just a collection for antiquarians, "The Frugal Housewife" is a fascinating work by a prolific author that will delight modern-day readers with its quaint but still usable recipes and tips.
This edition of "The Frugal Housewife "was reproduced by permission from the volume in the collection of the American Antiquarian Society, Worcester, Massachusetts. Founded in 1812 by Isaiah Thomas, a Revolutionary War patriot and successful printer and publisher, the society is a research library documenting the lives of Americans from the colonial era through 1876. The society collects, preserves, and makes available as complete a record as possible of the printed materials from the early American experience. The cookbook collection comprises approximately 1,100 volumes.

Title: Frugal Housewife: Dedicated to Those Who Are Not Ashamed of Economy (American An