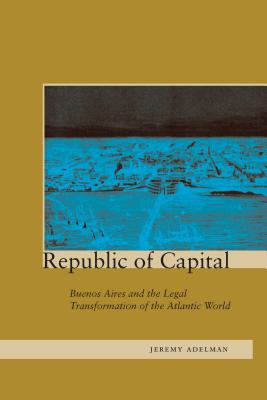 This book is a political history of economic life. Through a description of the convulsions of long-term change from colony to republic in Buenos Aires, "Republic of Capital" explores Atlantic world transformations in the eighteenth and nineteenth centuries.
Tracing the transition from colonial Natural Law to instrumental legal understandings of property, the book shows that the developments of constitutionalism and property law were more than coincidences: the polity shaped the rituals and practices arbitrating economic justice, while the crisis of property animated the support for a centralized and executive-dominated state. In dialectical fashion, politics shaped private law while the effort to formalize the domain of property directed the course of political struggles.
In studying the legal and political foundations of Argentine capitalism, the author shows how merchants and capitalists coped with massive political upheaval and how political writers and intellectuals sought to forge a model of liberal republicanism. Among the topics examined are the transformation of commercial law, the evolution of liberal political credos, and the saga of political and constitutional turmoil after the collapse of Spanish authority.
By the end of the nineteenth century, statemakers, capitalists, and liberal intellectuals settled on a model of political economy that aimed for open markets but closed the polity to widespread participation. The author concludes by exploring the long-term consequences of nineteenth-century statehood for the following century's efforts to promote sustained economic growth and democratize the political arena, and argues that many of Argentina's recent problems can be traced back to the framework and foundations of Argentine statehood in the nineteenth century.

Title: Republic of Capital: Buenos Aires and the Legal Transformation of the Atlantic W